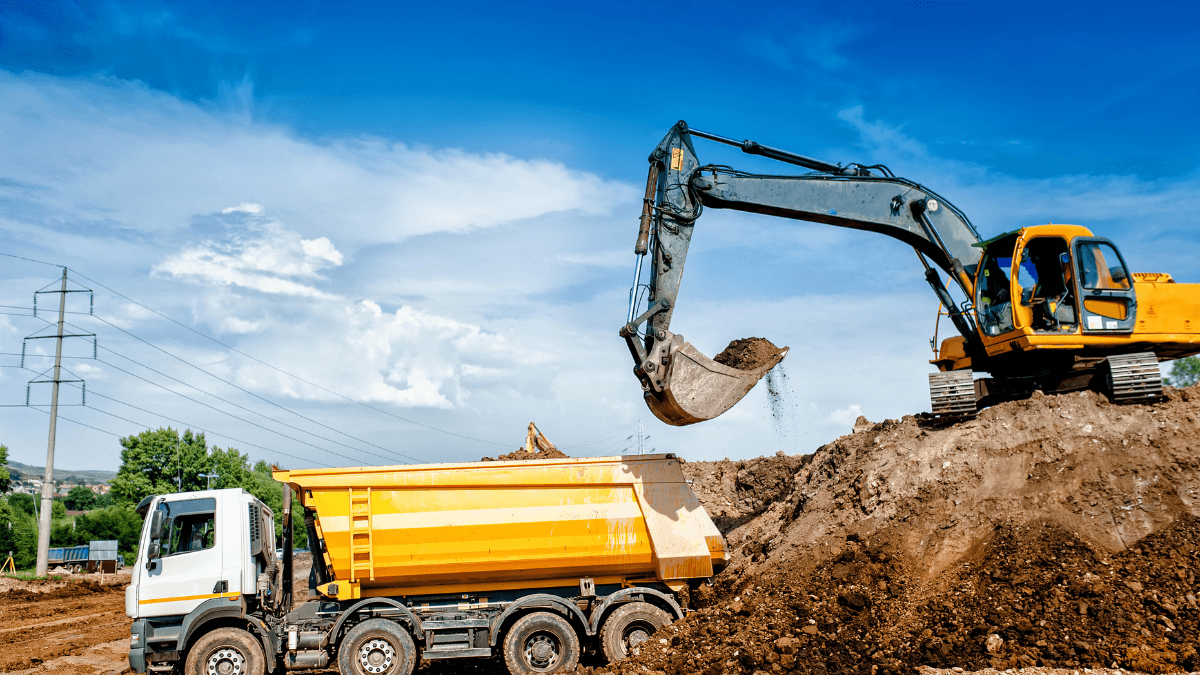 Civil engineering tools and equipment such as bulldozers, excavators, or graders are essential for successfully completing any construction project.

Against this backdrop, we’ll look at six common pieces of equipment used in civil engineering, their specific features, applications, and subtypes.

Bulldozers are among the most well-known and strongest types of heavy machinery, equipped with a metal blade at the front that’s used to push materials like soil and debris, with primary applications in road building, construction, and demolition.

Although that front blade can be lowered and raised or tilted using hydraulic cylinders, bulldozers are not designed to pick up and transport materials to larger distances.

That is the task of loaders, which we’ll cover later.

However, dozers can be used for spreading soil, shallow digging and trenching, ground leveling, and rough grading.

In other words, they’re a type of earthmoving equipment used when clearing a construction site from things like vegetation, trees, stumps, and boulders (site preparation), removing the topsoil and leveling the ground surface for future roads (road construction) or clearing debris (demolition) and snow.

Here’s a typical example of a track dozer (also known as a crawler dozer):

You can see the metal blade at the front and the continuous tracks (made of steel or rubber) that allow it to work on rugged terrains, whether mud, sand, or sloped surfaces.

The bulldozer above also has a claw-like attachment in the back called a ripper, which is used to break up surface rocks, asphalt, or concrete.

When dozers are on wheels, they work best on flat, solid surfaces where their four tires give them more mobility, and a shorter wheel axis allows them to make sharper turns, so they are more easily maneuvered on-site.

Unlike track dozers, they can operate on roads and don’t need to be transported from site to site on other vehicles to prevent road damage.

Even when wheeled bulldozers work on uneven surfaces, they have outriggers to stabilize them.

Bulldozers can also be classified according to their size—mini, medium, and large.

To sum up, bulldozers, whether on tracks or wheels, are powerful heavy equipment primarily used to push large quantities of material when clearing surfaces for future construction.

Along with bulldozers, excavators are essential earthmoving machines used in civil engineering.

As their name implies, they are primarily used for digging, but they can be used for other purposes, such as heavy lifting, loading, cutting, drilling, and dredging.

To perform different functions, they usually need the right attachment, such as the thumb (clamp), that enables excavators to pick up, move or grab objects that do not fit into their regular bucket.

Otherwise, excavators can be easily recognized by their arm, digging bucket, and fully rotatable cab while running on tracks or wheels.

Here’s an example of an excavator on tracks and another one on wheels:

Although wheeled excavators, particularly compact models, are traditionally seen as less stable than their crawler counterparts, technological advancements have enabled the creation of models with high stability, such as Mecalac’s MWR11.

In the words of Geoffrey Andrews, sales representative for Mecalac North America, this model has been designed with low centers of gravity while retaining the operator’s ground clearance, which means that:

The excavators can still work on uneven ground, however—without any damage occurring to their undercarriages. They’re very stable during operation, too, including when they travel uphill with loads.

While we’re on the subject of innovative tech solutions, it should be noted that all the equipment mentioned here, as well as an endless array of other tools and machinery used in construction, are best maintained and managed when their location and usage are tracked by an asset tracking app like GoCodes.

Turning back to track excavators, civil engineering projects often require deep or even underwater excavations, so there are specific models for such applications. In the images below, for instance, you can see long-reach (long-arm) excavators and dragline excavators.

The dragline shown on the right is larger than standard excavators and operates differently—using a hoist rope system and a dragrope to draw the bucket toward the operator.

That makes it ideal for deep excavations and dredging water beds of rivers, ports, and canals.

In summary, excavators are versatile earthmoving equipment used for many purposes other than excavation, such as demolition, mining, lifting, loading, cutting, drilling, and dredging.

Although they’re primarily used in road construction, maintenance, and repair, graders can be used for setting the foundations of larger buildings, creating inclined surfaces and drainage ditches, performing finish and fine grading, and removing snow.

The adjustable horizontal blade (moldboard) is located between the front and rear wheels and lowered to the ground when operated.

Here you can see the main parts of a motor grader, courtesy of NMC Cat:

The diesel engine that usually powers it (the prime mover) is situated under the operator’s cab, and the frame with a moldboard extends to the front axle.

The front part also contains a scarifier, which is used to tear up compacted surfaces like asphalt or packed ice.

At its rear end, you can see the same attachment that bulldozers use to break up pavement or hard-packed surfaces—a ripper.

When it comes to using a grader or a dozer, the main difference is their grading precision.

In other words, motor graders are used when projects call for accurate grading and leveling.

As for different types of graders, they can be sorted by size (small, medium, large), as well as by whether they have a rigid frame (usually older models) or an articulated frame (most newer models).

The advantage of articulated frame graders is that they can turn and move in places where space is limited.

In short, graders are a type of earthmoving equipment whose moldboard enables precise grading of surfaces, making them ideal for road construction and a range of other construction applications.

In addition to dozers, excavators, and graders, different types of loaders complete the set of earthmoving equipment covered here.

They’re primarily used to pick up and haul excavated soil, debris, and other materials or load them onto other equipment like dump trucks.

Which size and type of loaders will be used depends on their application, construction site conditions, and spatial limitations.

Unlike bulldozers that push material away, both tracked and wheeled loaders have a short arm and a bucket that allows them to scoop up materials and either move them around the jobsite or load them for transport.

The main types of loaders are defined by their size (compact, small, medium, large), but there are other subtypes, such as wheeled backhoe loaders, shown in this short video:

As you can see, backhoe loaders are tractor-like loaders with a loading shovel/bucket at the front and a backhoe at the rear.

Another subtype is skid steer loaders (SSLs, skid loaders, bobcats), where wheels on each side can be driven separately from the other side.

These compact and versatile models are essential on smaller construction sites in urban areas and other places with space constraints.

All in all, loaders are heavy machines with a large metal loading bucket and have many construction applications, primarily picking up and transporting excavated soil, debris, and other materials.

As their name suggests, mobile and stationary concrete mixers combine cement, coarse and fine aggregate, and water to mix concrete and prevent it from hardening by rotating it in a barrel or drum.

Although concrete mixers come in different shapes, sizes, and modes of operation, they can be divided into two types: continuous and batch mixers.

Continuous mixers are usually used for large projects that need a lot of concrete on a continuous basis.

On the other hand, batch or volumetric concrete mixers are used to produce the exact amount (batch) of concrete according to the desired specifications at the jobsite or while they’re traveling to the jobsite, usually in concrete truck mixers like this one made by McNeilus.

Naturally, while such trucks (or trailers) can be used to mix concrete while going to a construction site, they can also be loaded with already mixed concrete from the plant and used for transport only.

In both cases, their drum will keep turning to make concrete or keep it in a liquid state through agitation.

Other than concrete truck mixers, other drum-type mixers include tilting, non-tilting, and reversing drum mixers and pan-type mixers like the one shown below.

Depending on their size, pan-type mixers can be used on smaller construction projects or for mixing concrete specimens to check their properties before moving to batch or continuous mixing.

In summary, whether big or small, mobile or stationary, concrete mixers are used to mix the ingredients and produce perfectly mixed concrete.

Another tool used when dealing with concrete is different types of concrete vibrators.

Regardless of their type, they are used to make concrete stronger by removing air bubbles or air pockets from it.

More specifically, when fresh concrete is poured, tiny air bubbles are formed that, if not removed, weaken the integrity of concrete structural elements like foundations, beams, slabs, columns, and walls.

To avoid this, contractors can use different types of vibrators.

Let’s start with the most common type, immersion vibrators, also known as internal, poker, or needle vibrators, like this one made by Milwaukee:

This model is battery-powered and can handle up to two full truckloads of concrete, amounting to 20 cubic yards or 15 cubic meters.

Next up are formwork vibrators, also known as external or shutter vibrators.

As their name indicates, they’re attached to the outside of a concrete form to get rid of air bubbles inside the concrete and are typically used to compact precast concrete, columns, or thin walls, i.e., forms up to 6 inches (15 cm) thick.

In the below image, you can see multiple Wacker Neuson’s external vibrators in action:

Shutter vibrators are ideal for obtaining smooth and level surfaces on concrete elements like walls, columns, and pillars.

To sum up, concrete vibrators come in many shapes and forms, but they all have the same goal—making the concrete stronger by removing air bubbles.

Whether the equipment listed here is used for earthmoving (bulldozers, excavators, graders, and loaders) or concrete works (mixers and vibrators), their applications are essential for almost any civil engineering project—from roads, bridges, and dams to airports, universities, and hospitals.

So you heard that Apple's latest phone & mobile operating system, iOS 8, includes support for contactless payments using Near Field Communication (NFC) and now your ready to start using your iPhone to start scanning RFID Asset Tags. Hold your horses! Even though... 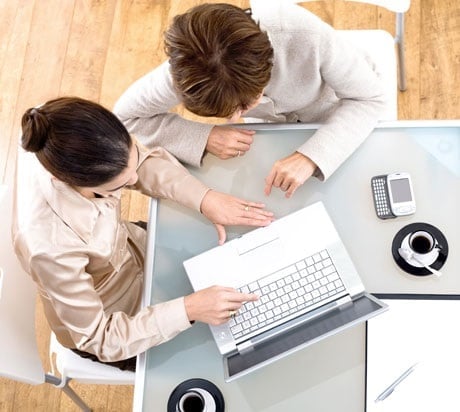 How to Choose the Best Inventory Software for Your Business

As your business continues to grow, it is vitally important to be able to track your inventory. Not only do you need to be able to see what you currently have in stock at any given time, you must also be able to process orders efficiently and find ways to streamline...