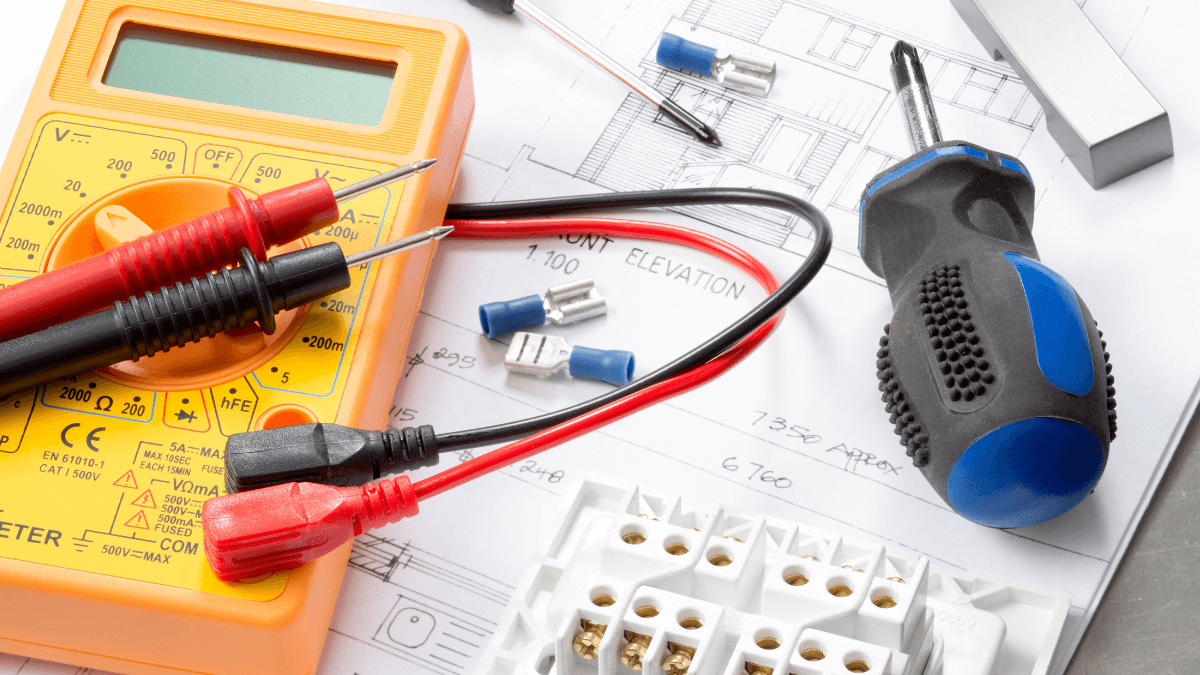 Whether you own or manage an electrical contracting company or work as an independent electrician, you know that residential and commercial electrical projects require the use of many tools, with distinct types and different names.

Naturally, electricians need these tools to do their job efficiently and safely, complete their projects on time, and keep their clients happy.

So, as a reminder, here’s a list of seven essential tools needed for electrical projects.

A multimeter is a device used to measure different electrical values, such as voltage, resistance, and current.

In fact, multimeters are probably the most commonly used electrical testing tool in the world, as they combine a number of functions needed for electrical projects.

Although they can vary in terms of design, typical models with a digital display look something like this.

As you can see, they are usually battery-powered and small enough to be held in your hand or positioned near the testing location, with a dial for selecting the test function and two long test leads with metal ends.

Those leads are used when electricians want to test electrical components like wiring, cabling, switches, junction boxes, and other equipment.

They can also be used in place of basic electrical testers, such as non-contact voltage detectors and neon voltage testers.

Another function of a multimeter is detecting whether a live electric current is present in a particular location, so it can be shut down before beginning any electrical work.

So in summary, a multimeter is an essential tool for electricians that is, in addition to protecting their safety, capable of testing different electrical properties.

Electric drills, corded and cordless, are extremely useful tools present on construction sites around the world.

As such, they are also standard tools electricians use to install or remove outlets, lighting fixtures, and switches, as well as drill holes in the walls, floors, and ceilings to put wires or cables through.

Drills are becoming smaller, lighter and more powerful as technology progresses, which is good news for electricians and construction professionals.

Although corded drills do have some advantages, like higher and more consistent power, cordless drills are more popular among electricians because of their flexibility, namely the fact that they don’t need to be plugged into a power source.

Instead, they usually come with at least one battery pack (often two, so one can be charged while the other is used).

When it comes to choosing the best cordless drill for electrical work, the market offers a plethora of choices, so it’s best to do research and read the reviews or buying guides, like this one from Pro Tool Reviews:

As for different types of cordless drills, there are impact drivers (regular drills) mainly used for fastening screws and drilling into masonry.

Hammer drills have a hammering mechanism that allows them to drill into concrete about 25% faster.

Overall, whether corded or cordless, electric drills are an essential tool on any construction site, and electricians rely on them to install or remove different electrical fixtures and components or drill holes for wiring/cabling.

Although the market offers many different measuring tools, we’ll focus on two essential ones used by basically everyone, including electricians—a tape measure and a level.

A basic tape measure is used for different measurements, such as the required length of a wire that needs to be put through, marking the height of switches and outlets, and centering light fixtures.

Some tape measures have a magnetic tip that can stick to iron and steel surfaces, allowing users to take accurate measurements without help from another person holding the tip.

There are also digital tape measures where the distance is measured by a laser and shown on an LCD display, or even all-in-one tape measures like this one.

Another essential tool that allows electricians to make their work level and straight is a spirit level that usually contains two or three vials (tubes) filled with yellowish-green liquid inside which there is an air bubble.

When the level is placed on a surface, the bubble shows whether it is perfectly horizontal or vertical (or level at 45º).

Naturally, levels come in many shapes and forms, but most electricians will have a smaller torpedo level that enables them to make measurements in tight spaces.

As with tape measures, the market also offers more advanced versions like the one shown here.

As you can see, this torpedo level will provide a digital reading. It even comes with an audio indicator that lets you know if your work is level even when you can’t see the display.

Other measuring tools include long tapes, measuring wheels, long distance meters, and other digital and laser measuring tools, but a tape measure and a level should have their place in any electrician’s toolbox.

Maybe the most traditional but essential tools for electrical projects are screwdrivers.

They are used to tighten or loosen different types of screws when electricians want to install various outlets, light switches, and electrical boxes or remove their cover plates to access interior components.

Electricians usually opt for insulated screwdrivers like the ones shown below because they offer better protection against electrical shock.

Furthermore, there are torque screwdrivers that come with a preset or adjustable torque, enabling users to choose the force with which to tighten a screw to avoid damage from over-tightening.

Of course, which screwdriver should be used will also depend on the type of screw.

Although there are many more kinds of screws and their corresponding screwdriver tips, here are the six most commonly used ones:

In short, screwdrivers are traditional tools that are also used for electrical projects, and electricians should have a set of insulated screwdrivers with them wherever they go.

Fish tapes are a popular electrician’s tool used for pulling electrical wires and other cables through conduits (ducts) inside walls, floors, and ceilings.

They’re often used to make improvements, such as extending the existing or adding new wiring when the above-mentioned surfaces are already covered with drywall, to avoid making additional holes or openings.

A fish tape (also known as an electrician’s snake, draw wire, or draw tape) normally comes rolled up in a round plastic casing.

It is then pulled out manually and, after use, reeled back into the casing (manually or automatically, depending on the type).

Here’s an example of one of the top-rated fish tapes, according to Electronics Hub:

When used, the tape is forced through one end of the conduit, and when it comes out at the other end, a wire is attached to it and pulled back through.

To sum up, fish tapes are a practical tool that allows electricians to run wires and cables through already-finished walls, floors, and ceilings without making additional holes or openings.

Pliers are another traditional tool used for multiple purposes, including electrical projects.

They are used for gripping, bending, twisting, straightening, and cutting wires.

As with screwdrivers, when doing electrical work, it’s best to go with insulated pliers, since they represent the safer option.

Naturally, pliers come in many types employed to handle various kinds of wires.

For instance, tongue-and-groove pliers, like the ones shown below, are often used by plumbers, but also come in handy for electrical work.

These pliers can be used to remove knockouts on electrical boxes, squeeze cable clamps together or make different adjustments to lighting fixtures.

In electrical projects, needle-nose (long-nose) pliers are more commonly used, as their long and narrow tip is particularly useful for detailed electrical work.

Among other uses, they are utilized to bend and twist wires to create screw-terminal connections.

Most of them will also have cutting jaws for trimming wires.

Another pair of pliers often used by electricians (i.e., linemen/linewomen) are lineman’s pliers that can straighten, bend, cut, and twist wires together when needed.

For example, here are a few offered by Acme Tools.

The last on our non-exhaustive list of pliers typically used on electrical projects are diagonal cutting pliers, also known as side-cutting pliers, dikes, or side snips.

Regardless of their name, they have a cutting edge across the full length of their jaws, allowing users to cut and trim wires in tight spaces.

Some of these pliers can be equipped with a voltage detector that will detect live wires and alert the user.

Overall, pliers are versatile tools often used by electricians to manipulate wires how they see fit.

Last but not least, wire strippers are a special electrical tool used to cut and strip insulation from electrical wires to expose the copper inside and create a connection with other electrical components.

Wire strippers come in many shapes and forms and can resemble pliers.

For example, the self-adjusting wire stripper shown below will allow users to set the wire stripping strength and length, provide cutting jaws to trim the wire ends, and serve as a crimping tool.

Along with multimeters and fish tapes, wire strippers are among the most useful specialty tools used in electrical projects.

Before we go, there is another tool contractors and electricians alike can use to keep track of all their tools and equipment and ensure they know where they are and who is using them at any time, thus preventing misplacement and theft and increasing worker accountability.

We’re talking about tools and equipment tracking software, such as GoCodes.

This easy-to-use mobile app will make sure that wire strippers and all other tools mentioned here are not lost or stolen and that they’re regularly maintained and available when needed.

So, now that we’ve covered the tools needed for electrical projects, you can see that many are traditional and widely used tools, such as drills, tape measures and levels, screwdrivers and pliers.

Others are more specialized, and essential for electrical work, such as multimeters, fish tapes, and wire strippers.

In any case, these are the basic tools any electrician will need to do their job safely, accurately, and efficiently, finish their electrical projects on time, and keep their customers or managers happy. 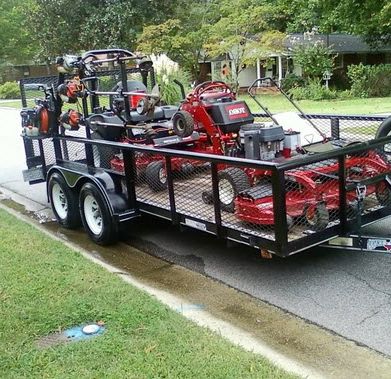 Landscaping is a very rewarding industry. After all, there is certainly no shortage of individuals and companies in need of perfectly manicured lawns, gardens, and home or office exteriors. However, being able to provide these services to clients requires plenty of... 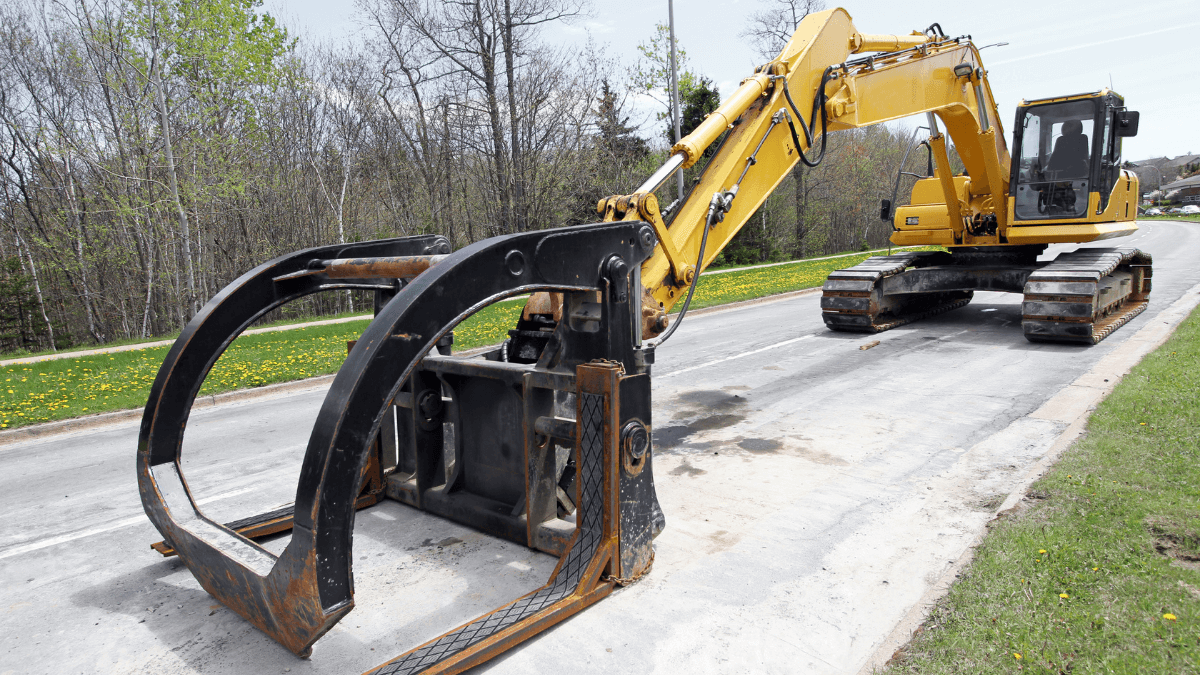 Must-Have Attachments for Your Excavator Machine

It’s hard to imagine a construction site without an excavator.  Ever since William Otis engineered his steam shovel in 1796 to excavate dry earth, excavators have been indispensable in various construction projects. Digging, clearing, dredging, landscaping,...